I’m just going to say it straight out.  Fairies take things.  They have a very skewed sense of ownership, as in, if I live here, I must own it; therefore I’ll take this pretty thing.   It’s not the queer two dollar bill your Auntie gave you for your 10th birthday that they want.  Value as we see it has nothing to do with value the way a Fairy sees it.  They’ll take a pad of Post-It Notes with 2 left on it. Or the only sharpened pencil in the cup.  Or the back off my earring.  Not the gold earring, mind you, just the back.

Some have suggested that they aren’t fairies, but rather, Borrowers.  Well, no Borrower I’ve heard about would want the back off my earring.  There’s absolutely nothing they can do with it, and besides, Borrowers are only after practical things they can re-purpose.

It’s impossible to know what a Fairy will be attracted to.  Many say they love bright, shiny objects, but how shiny is a Post-It Note, exactly? And have you ever seen the back of an earring??  I do have a bowl of plastic Mardi Gras throw beads to which they seem attracted.  At least they poke around in it a lot. 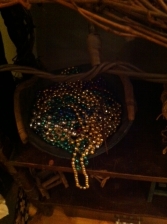 I found just one strand pulled out of the bowl...like they changed their minds suddently.

They never take any, though.  I suspect they’re bummed out by the plastic aspect of it.  Yet, they absolutely adore my tiny wind-up plastic chicken that lays jelly bean eggs when she walks.  I think they wind it up and watch it walk at night.  It sends them into hysterical gales of laughter and they crowd around it and shove and poke one another, and take turns marching up and down the bookshelf imitating the chicken. The next day I’ll find that chicken across the room on a high bookshelf, with jelly beans strewn across the floor. They don’t eat the jelly beans, but they do love to throw them at one another.  And that one sharpened pencil in my desk cup?  Later that day I found it (with a broken point, of course) sticking out of a book on fairies on my nightstand.  They’d scribbled in the margins a bit and corrected a few of the author’s errors. Ahem.

Occasionally, they’ll take something that is important to me, and I’ll have to ask for it back.  Like my glasses.  They are either in my purse or on my face…nowhere else.  Suddenly gone. My fault, having left my unzipped purse in the dining room.  I should have known an open purse would be irresistable. I was desperate to get the glasses back, so I wrote a very small request on (what else) a Post-It note, and left it on the fairy altar in the dining room.  I put a small cup of fresh water on top of it….fairies need fresh water and will be attracted right away.  Then I waited.   The cat drank all the water, so I had to refill it a couple of times.  Two days later I heard a crash come from the dining room, and running back in, I found the cat staring intently up at the ceiling, where my glasses swung every so gently and precipitously from the chandelier.